Its Time To Get Aboard With Gold Train Slots 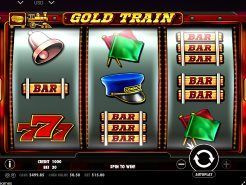 Play Now
Developed and powered by gaming company, Pragmatic Play, Gold Train Slots is a new, state of the art video slot, that delivers the ultimate train ride in the form of prizes and cash.

This graphically pristine, visual wonder, comes in three reels with three pay lines. The theme of the game suggests is about taking a ride aboard the non stop, gold train. All the symbols reflect this travel theme game, with the wild symbol consisting of none other than the gold train itself. This symbol will replace all the other symbols with the exception of the scatter icon and the upgrade symbol. And when it does land, it will double winning combinations. The train is also the highest paying symbol, dishing out 500 coins for getting three to land. The scatter icon is represented by the train ticket. This symbol is the key to launching the progressive bonus round by getting three to land. During the progressive bonus round, no fewer than 10 train carriages are presented to you, with each one containing its own prize. Instead of choosing the carriage, the prize is randomly awarded to you. During regular game play, if the gold ticket hits on the pay line along with the ticket icons, anywhere from four to 10 additional carriages will show up in the progressive bonus round. The other game symbols include the train conductor's hat, red and green flags, a bell, red sevens, a single bar, a double bar, and a triple bar. General wins are determined from the left of the reel to the right, by getting three of a kind of an icon to land on the reels. Next to the train wild, the red sevens, is the second highest paying symbol. Getting three to land will result in 30 coins. Feel free to place your own bets, or set them up through auto play mode. Another feature in this game is the turbo spin feature, which spins the reels at lightening speed. If you are ready to take a ride on the gold train, then all it takes is a nickel to get the reels spinning and the engines cranking. There is an info button to quickly go over game rules and winning combinations. This game comes fully optimized for optimum gaming experiences on both desktops and mobile devices.
Play Now