Empress of the Jade Sword Slots 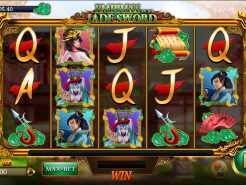 Play Now
Considered yourself invited to a time where kings were kings and honor was worth fighting for. Return to the land of feudal Japan where glory and honor is at stake. Enter the world of The Empress Of The Jade Sword Slots by Microgaming.

An Inside Look At The Game

This visually stunning wonder of a slot game comes in five reels with 20 pay lines that incorporates the fantasy genre with magic. This game is an Asian themed title which centers around life in Ancient Japan. The game play takes place right in the middle of the town. To help immerse you into the experience, there is a soundtrack and ambient noise as well. As one would expect, the symbols are carefully crafted to fit this theme. The wild symbol is represented by the jade sword. This symbol when it lands will not only impact winning combinations as an extra winning multiplier, but it will also grant you a re spin. It is also important to note that while playing in the free spins round, if you land a wild jade alongside a high paying symbol, that symbol will also turn into a wild jade. The scatter symbol is represented by the temple. This icon is the key to launching the free spins round. The more of these that you land, the greater the free spins you will play with. Three will start you off with 8 free spins, four will shell out 12 free spins, and if you manage to get five, you will play with 20 free spins. You can also continue amassing additional free spins as well. Another important symbol to look out for is the bonus symbol. You must get three of these to land in order to play the Pick Bonus round where you pick among ninjas until the round ends. Your prizes and winning multipliers will be tallied up at the end of the feature. The other game icons include the Geisha, the warrior, a sorceress, a scroll, a fan, a dragon spear, and the playing card numbers aces, kings, queens and jacks. The aim is to land three of a kind of an icon to score a win from the left of the reels to the right. You can place your own bets or have them play out in auto play mode.
Play Now