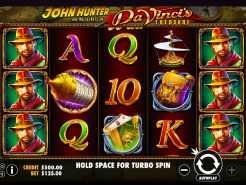 The Inside Details About The Game

The flow of the game plays out like an Indiana Jones cinematic adventure. In fact, the main character bears a resemblance to the famous character. The game play takes place right on a map. All the icons support the adventurer theme. The wild symbol is represented by the wise man. He will only land on the second, third, fourth and fifth reels. And when it lands, it will double winning combinations. The bonus symbol will only land on the second, third and fourth reels. And when three of them lands, it will trigger one of many random bonus rounds. The first bonus round is called the Map Quest bonus where there are 23 points along with a wheel of fortune bonus wheel. The second bonus round is known as the progressive multiplier free spins round. You begin with 12 free spins where the winning multiplier starts at 1 time. After each spin, the winning multiplier will grow by a factor of one. There is also the prize picker bonus round where you pick among prizes to reveal a prize. The other icons include jeweled pouches, a bow and arrow, the dapper adventurer along with the playing card numbers, aces, kings, queens, jacks, tens and nines. The aim is to get three of a kind of an icon on the pay line to score a victory. You have the option of placing your own bets, or you can set them up in a sequence through auto play mode so you can sit back and take in all of the sights and wonders of Octopus Technology’s DaVicini’s Slots, an adrenaline rush with strong elements of nostalgia, Indiana Jones style. This title comes fully optimized for both desktop and mobile device users to enjoy at your leisure, and at any time. There is a pay table button where you quickly review the game icons and their respective amounts, as well as dive into further detail the bonus rounds. There is also an options button where you can tweak games settings like reel speed, audio and ambient game sounds. If you’re ready for an adventure of a lifetime, then all you need is a penny to make your mark.
Play Now