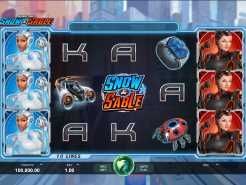 Play Now
Did we mention how busy Microgaming has been? Well best believe it, these high powered gaming engine is back on top of their game with another upcoming slot, Action Ops: Snow And Sable Slots.

Going Inside The Action

This five reel game comes in 10 pay lines. The game play takes place in the future with a fierce crime fighting duo. There are even stylish sky scrappers in the background. The wild symbol is represented by both the sable and the snow. They both will replace the other symbols except for the sub symbol. Depending on the combination, you can win up to 100 times your bet placed. Should you land the mixed wild, the Sable and Snow, you can make up with 50 times your win. There are also stacked wilds, specifically the snow and sable icons which are stacked above the reels, providing even larger winning combinations. The scatter symbol is represented by the snow and sable scatter icons. It takes getting at least three of them to land on the pay line to play in the free spins round. Depending on the number of scatters you land, you will play with either, 10, 15 or 20 free spins. The winning multipliers can be either a double one, a 10 times multiplier or a whopping 100 times winning multiplier. Should you land wilds in the free spins round, it is even possible for the winning multiplier to even go as high as 200 times. Should you land 2 or three additional scatters in free spins round, you will receive 5 a 10 free spins respectively. The other icons in the game are bugs, cars, glasses, a watch, and the playing card number, aces, kings, and queens. You must get three of a like icon on the reel to score a victory. Ready to get on your way? Then all it will take is a penny to get the reels spinning. The maximum bet per spin is $100. You will be able to place bets manually or through auto play mode. The choice is yours. There is a pay lines button which allows you to make precise bets, to go along with a menu and options button to adjust games settings and to find pertinent game info. Microgaming pulls no punches when it comes to their impending release, Action Ops: Snow And Sable.
Play Now